Showing posts from July, 2020
Show All

Are Women in “Progressive” Circles in India Safe? 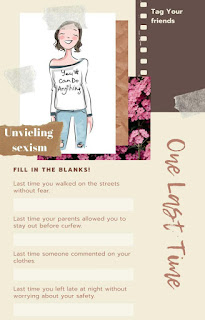 We recently took to Instagram stories for an activity that analysed how a young Gen-Z Indian girl in the supposedly “progressive” society of today feels, even in relatively modern metropolises in privileged households, and the results were - while unsurprising - disheartening. The questions were about whether they were allowed to stay out of their homes after dark, and even when they did, whether they felt safe, and how often they were subjected to demeaning comments about their clothes. A large majority of the responders were restricted heavily by their parents when it came to being allowed to stay out at night, which showcases how Indian households continue to disproportionately restrict their daughters’ freedom over their sons. However, this phenomenon cannot be blamed solely on the cultural background. It is because of the inherent fear that plagues the conscience of every Indian parent for their daughter’s safety that often holds them back from giving a level of freedom to them th
1 comment
Read more

- July 24, 2020
Girl Up Neev made its first mark on the world with a seminar on "Let's talk hygiene with Sirona". Ms. Nikita Sakija took us through an insightful journey of intimate and menstrual hygiene issues for women and inspired us to #bethechange.  She took us through the process of sustainable menstrual hygiene and its importance in today’s society and how a lot of people are still unaware about its importance. She took us through the impact her organisation, Sirona, has had on society and how they’ve had a presence all over India to create this change and encouraged people to make the switch towards sustainable menstrual hygiene. She's making people aware about how menstrual cups are better than using sanitary pads while most of the females use pads. Every year 150 kgs of pad’s waste does not degrade in the environment. Sirona’s Menstrual Cup saves our environment by minimizing sanitary waste which creates toxins. With proper care and good cleansing a cup can be used for the
Post a Comment
Read more