Showing posts from May, 2022
Show All

The plight of the unemployed bread earner

While having held the privilege of better job opportunities, a say in the country’s systems & politics & the freedom to pursue whatever pleases one’s heart, men have also had to bear the brunt of the societal standards fixated on them. Because of the gender inequality that persists in society, it is not intuitive for anyone to understand the pressure men are under & society’s role in reducing it. For eons, men have had to shoulder the responsibility of being the sole bread earners of the family. Ever since childhood, they are taught to put up a bold face & face the world headstrong to provide for food on the table. It is ingrained in their minds that it is their sole responsibility to ‘provide’ for the family. If not, they are not fulfilling their moral duties. They have had to live up to the labels of being ‘strong’ & ‘successful’. Branching from this pressure is the machismo we see affecting both the men & women equally. Beholding the title of ‘the breadwinn
Post a Comment
Read more

Women and Pockets: A Patriarchal Move 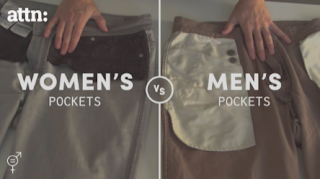 It’s a struggle for all women to find the perfect piece of shirt, jeans, or dress with pockets in it. And even if you are able to find one, much to your disappointment, it’s a fake one. The history of pockets in women's clothing goes a long way back. People used pouches made of leather and cloth to keep their valuables safe. The 15th century was when the pockets came into the limelight and almost everyone started using pockets. But they were mainly in the form of cloth hanging like purses from the belt area. It was the 17th century when the modern style of sewn pockets emerged but unsurprisingly that was for men’s clothing. Women continued to have bag-like pockets tied to and hidden beneath their skirts. There was gender inequality in even pockets in the clothing. As fashion evolved, the baggy pockets also dissipated and women were back to using bags to store their stuff. Their pockets were just to show and their bags could also hardly keep anything other than handkerchiefs and
Post a Comment
Read more
More posts